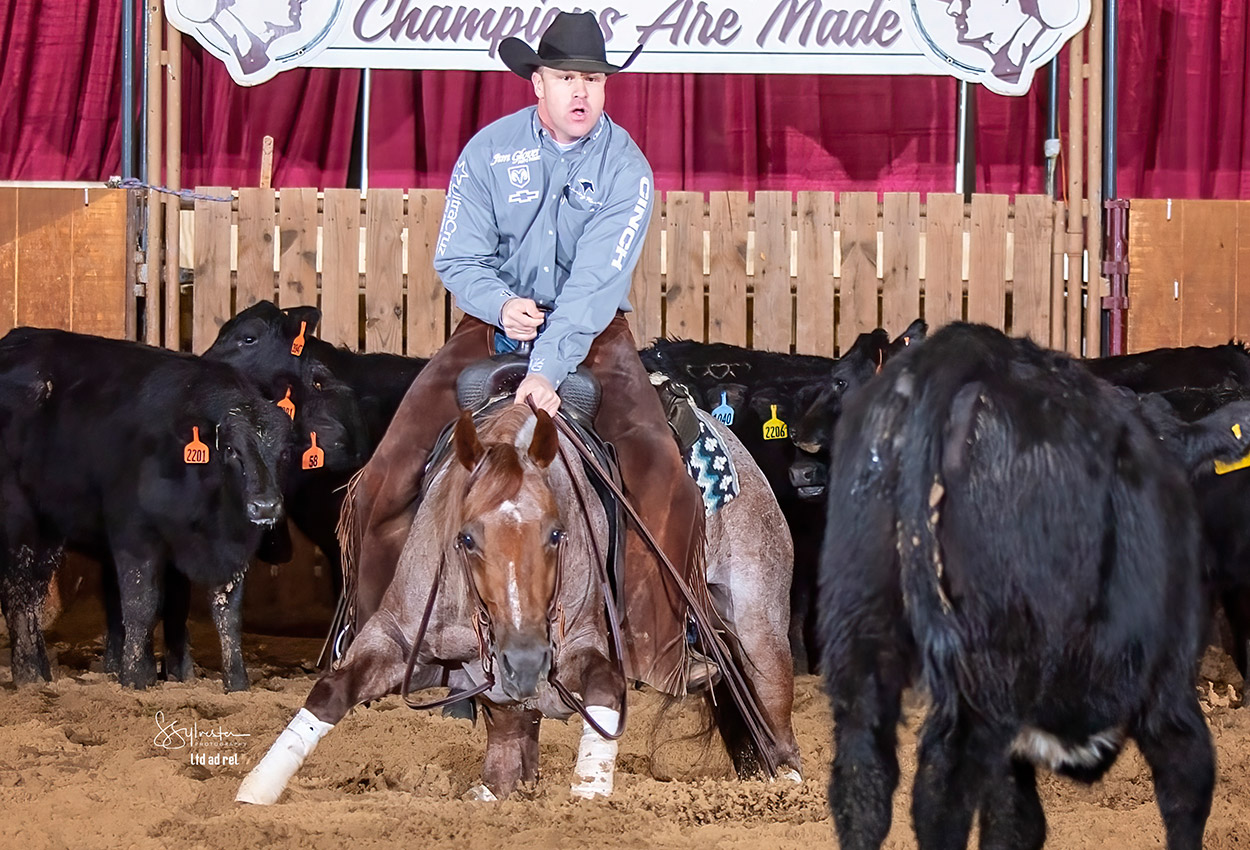 The crowd was hootin’ and hollerin’ as Wes Galyean and Third Edge walked into the herd at the Arbuckle Mountain Futurity 4-Year-Old Open finals.

The audience wanted to see this horse win. He didn’t disappoint.

Galyean and the red roan stallion marked a winning 223.5, much to the delight of the crowd.

The horse has a sentimental value to his connections, because owner-breeder Steven Feiner, of SMF Cutting Horses named the horse for his best friend, Greg Harms. The horse’s registered name played off Greg’s Alaska-based heli-skiing company—Third Edge Heli – and his barn name became “Harms.”

When Greg died in a helicopter accident last year, the emotional value of this horse skyrocketed.

“Harms was a great, cool guy that everyone loved. Everybody is rooting for this horse, so it was a real emotional deal,” Galyean said.

In the first go, the duo marked 216.5. During the video replay, Galyean thought Harms worked well but was a little soft. Heading into the second go, Galyean planned to kick it up a notch. Harms responded with a 221.5. Galyean knew they had a chance to win it.

“In the finals, he was really good from the beginning. Our second cow was a gray baldie. I could feel Harms getting down and hunting. He was getting creative,” he said. “The third cow pushed me over the top—Harms really got down on his belly and I felt his nose hit the ground a few times.”

The red roan stallion is by Metallic Rebel and out of Lil Rattler, a Dual Rey mare who won more than $338,967 in the show pen. His second dam is National Cutting Horse Association Futurity Open Champion Highbrow Supercat, the late great mare who went on to foal the winners of more than $1.7 million after her show days were done.

The $35,160 that Third Edge and Galyean won in the Arbuckle Mountain Futurity pushed his lifetime earnings to more than $54,375, and made him the Lil Rattler’s leading money earner.

Galyean also placed fourth aboard Aspen, a sorrel mare also out of Lil Rattler he owns with his wife Kristen. That added $16,794 to his earnings.

“Aspen is a great mare. She drew last in the second set– an extremely tough draw. But, to come out of that and to do as good as she did is a testimony to how smart she is,” he said. “I thank God for the blessings he has given me and the opportunity to have this horsepower.”